Having managed to get my hands on an Acorn A5000 Alpha (33MHZ Version) I set about seeing how fast (CPU & RAM) I could get the machine to go. The Aplha version of the A5000 has a socketed MEMC which is quite helpful as it makes overclocking the RAM easier too.

First up is overclocking the CPU. This is the easy part mainly due to the fact the existing 66MHZ crystal is already socketed. Perhaps someone has overclocked this machine in the past? Either way it is just a case of getting a selection of crystals and testing them to see how fast we can get the ARM3 to go. I started out with a 80MHZ (giving us a 40MHZ CPU speed) crystal expecting this to be near the limits but when booted up the machine runs fine with no stability issues at all.

This made me try higher speed crystals. In the end the fastest it could reliably go was 48MHZ. At 50MHZ you get issues booting the machine. But at 48MHZ all is well and is quite an improvement over the original 33MHZ.

With the easy bit done it is now time to turn our attention to the RAM. Overclocking this could be tricky due to the base 2MB of RAM, which consists of 16 chips, is soldered directly on to the motherboard. Basically I didn't want to have to remove all that RAM and replace it. The RAM is rated at 70NS so I wasn't expecting to be able to overclock this very much.

Another consideration is the MEMC chip. In my A3010 Adelaide Overclock which basically uses the same chipset as you find in an A5000, the MEMC in there could manage 20MHZ and that was it. So my aim with the overclock mod is also going to be 20MHZ as faster MEMC chips just do not exist.

First off I removed the 2MB RAM expansion board that was in there so I was left with just the 2MB base 70NS RAM on the motherboard. I built a small board which I mounted a socket for a crystal on. I then plumbed the clock signal directly into the MEMC CLK pin 67. Normally this pin is connected to the same 36MHZ crystal that feeds the VIDC chip. As I do not want to overclock both of them I lifted the MEMC CLK pin up and connected it directly to my new crystal. 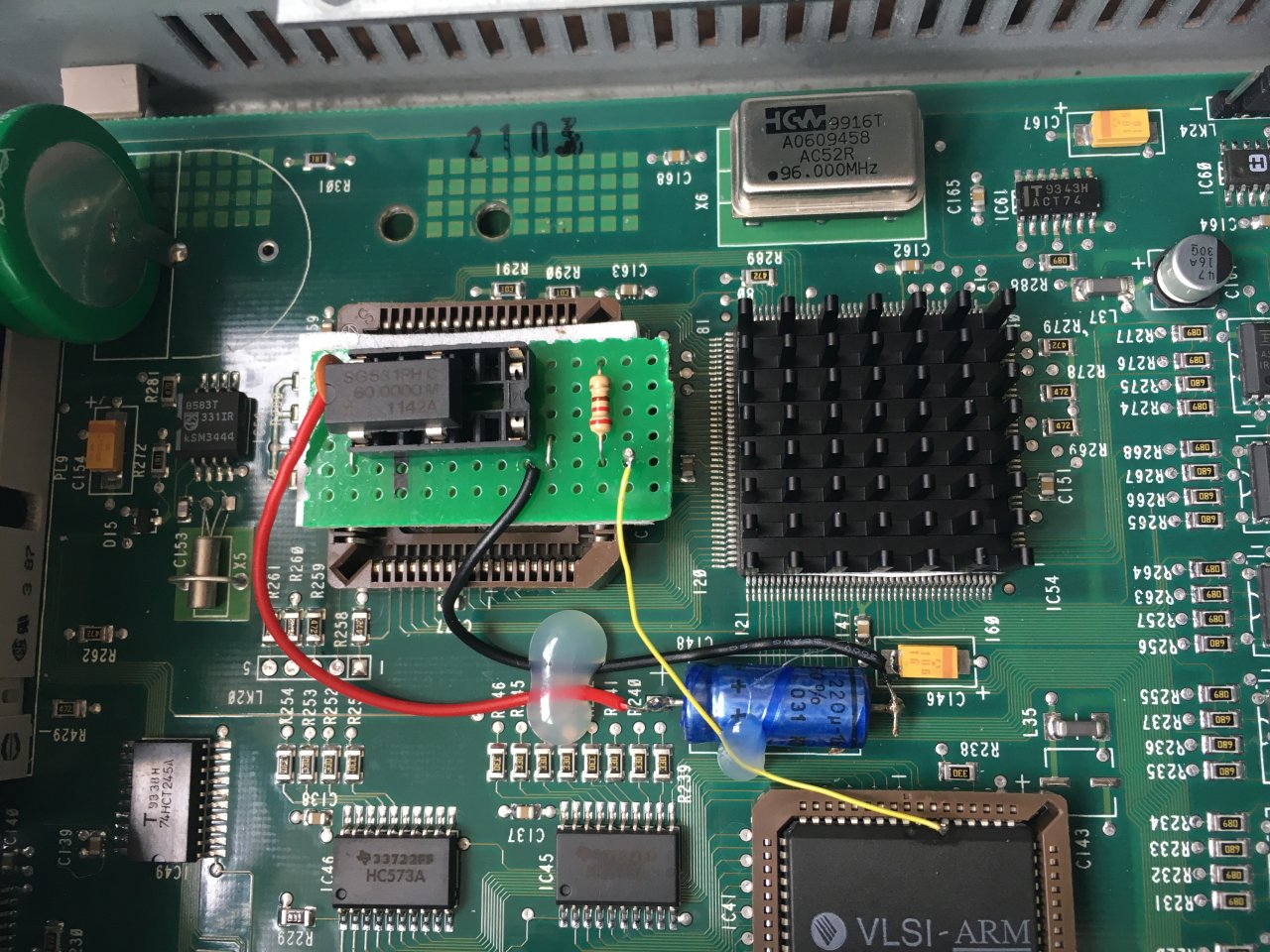 With the modification in place the fastest the RAM would run at reliably was 20MHZ, the same as the A3010 Adelaide overclock which I'm happy about. The improvement over the standard 12MHZ RAM is obvious especially in games which do lots of memory writing like Star Fighter 3000.

This is the main issue now. I've overclocked the motherboard 2MB RAM to 20MHZ, however, the 2MB RAM expansion board will not work above 16MHZ. Damn! I could either leave it at 16MHZ or settle for only 2MB of faster RAM. Or another way to achieve the full 4MB running at 20MHZ is to replace the 4 SOJ-40 chips on the expansion board.

This is what I did. By some coincidence the expansion board uses the same sort of RAM that is used in the A3020 which I have overclocked in the past. I also have some of the 28NS RAM I used on that modification left over.

The RAM I used has this marking M5416258B-28J and was suggested by munchausen on the forums. Here they are ready for action: 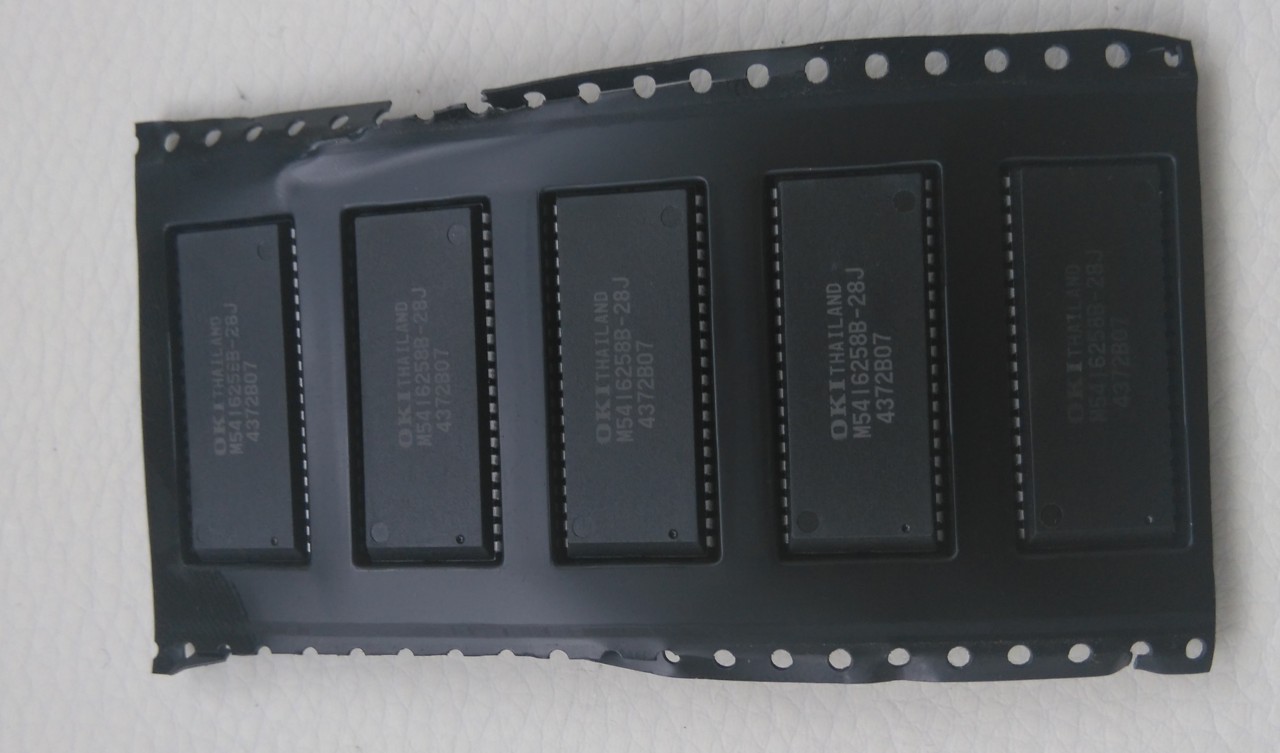 Using a hot air re-work station I removed the original 4 RAM IC's and replaced them with these faster chips. The speed of this RAM is rated at 28ns which equates to about 35MHZ. It's not possible to run the A5000 RAM at that speed but it will happily run along at 20MHZ! Here are the new RAMs nicely soldered in place: 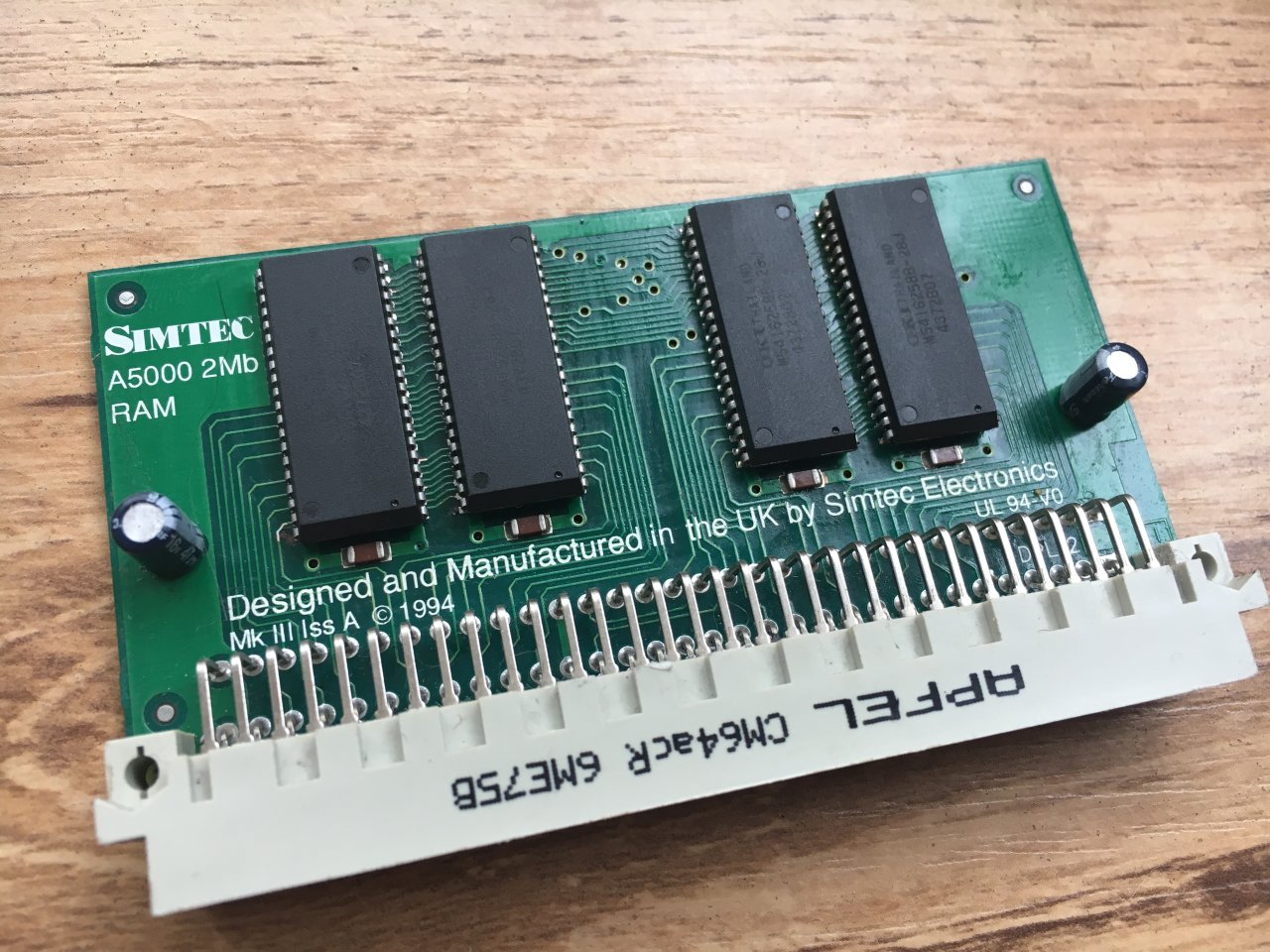 Now, finally, with the new super fast RAM fitted and the machine booted up and all working well, it's time to benchmark it again. The machine is now running at 48MHZ rather than the original 33MHZ and the RAM is running at 20MHZ instead of 12MHZ so, as you can imagine it isprobably the fastest Acorn RISC OS 3.1 machine out there delivering about 25MIPS instead of the original 17MIPS! 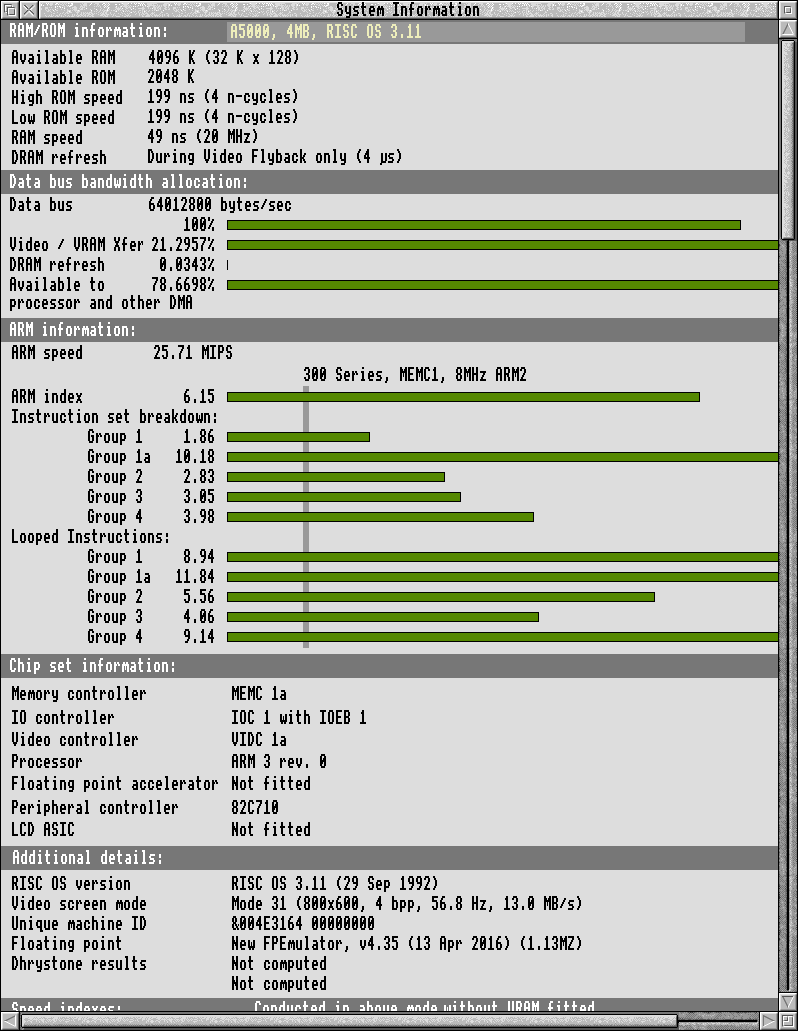