Okay, this does not apply to most Acorn Archimedes A3010 computers. Only the very early models that were fitted with a daughter-board (named Adelaide) contaiing IOC, MEMC, VIDC and the ARM2 processor. Later A3010 models used the ARM250 chip which integrated these chips onto a single IC making upgrading to an ARM3 processor impossible.

This procedure has been done before, notably by Retro Kit. The difference with my modification is that I will be overclocking the RAM/MEMC to 20MHZ (as opposed to its original 12MHZ) by adding a separate crystal for the MEMC.

Once the ARM2 chip has been removed I located the clock pin on the MEMC chip and lifted it off its pad and bent it up on itself, so it could be accessed from above the chip later on. With this done I installed a PLCC 84 pin socket. The soldering for this is very delicate and the base of the socket had to be removed to make it easier. 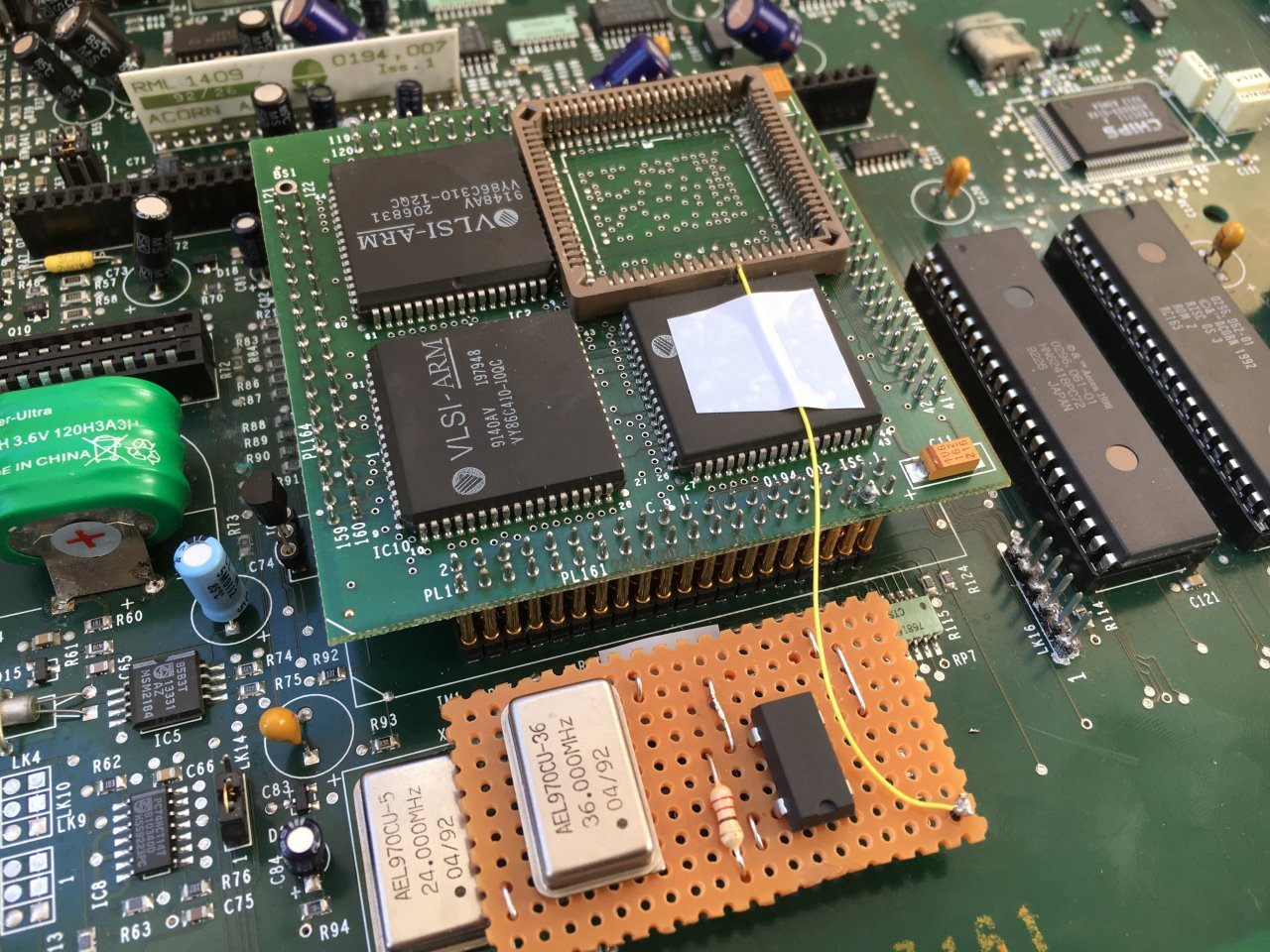 As the MEMC chip and VIDC share the same 36MHZ crystal I needed to create room for another crystal to allow me to overclock the RAM without affecting the VIDC. I did this with some PCB stripboard as can be seen at the bottom of the picture under the Adelaide daughter board.

The 36MHZ crystal continues to feed the VIDC chip and a new 60MHZ crystal now feeds the RAM which gets divided down by 3 inside the MEMC and equates to a RAM speed of 20MHZ. I have tried faster crystals, however 20MHZ seems to be the safe maximum speed the MEMC can be run at.

With the MEMC clock pin connected to the new PCB stringboard below and the PLCC socket installed it is time to insert the ARM3 upgrade board. As pointed out on Retro Kit a modification needs to be performed to ensure it works correctly on the A3010. The modification involves making a connection between Pin 16 of the ARM2 plug to Pin 29 of the ARM3 chip.

Overclocking the ARM3 to 32MHZ

I also removed the 50MHZ crystal from the ARM3 board and replaced it with a socket as I'm a strong believer in overclocking and couldn't resist!. I have seen people running a 25MHZ rated ARM3 at 30MHZ so I thought I would do the same, well I pushed it to 32MHZ and added a small heat-sink which works well. There have not been any problems with it so far. 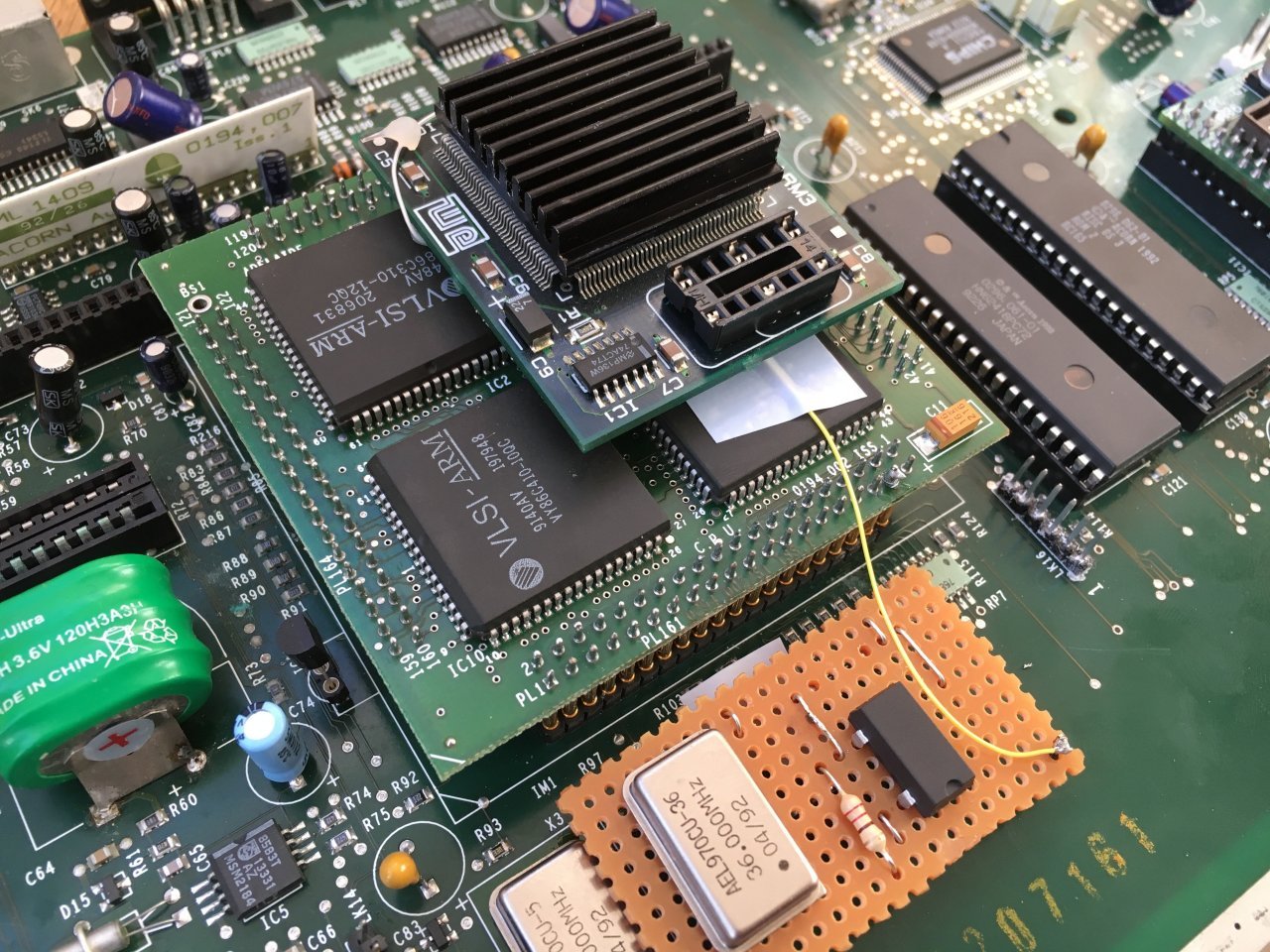 With the upgrade completed its time to boot-up and thankfully the machine powers on and quickly (very quickly!) has booted to the RISC OS 3.1 desktop much faster than before the upgrade. To see it has worked I did a performace test using !ArmSI V4. Interestingly, when you run !ArmSI it reports the machine as an A5000! 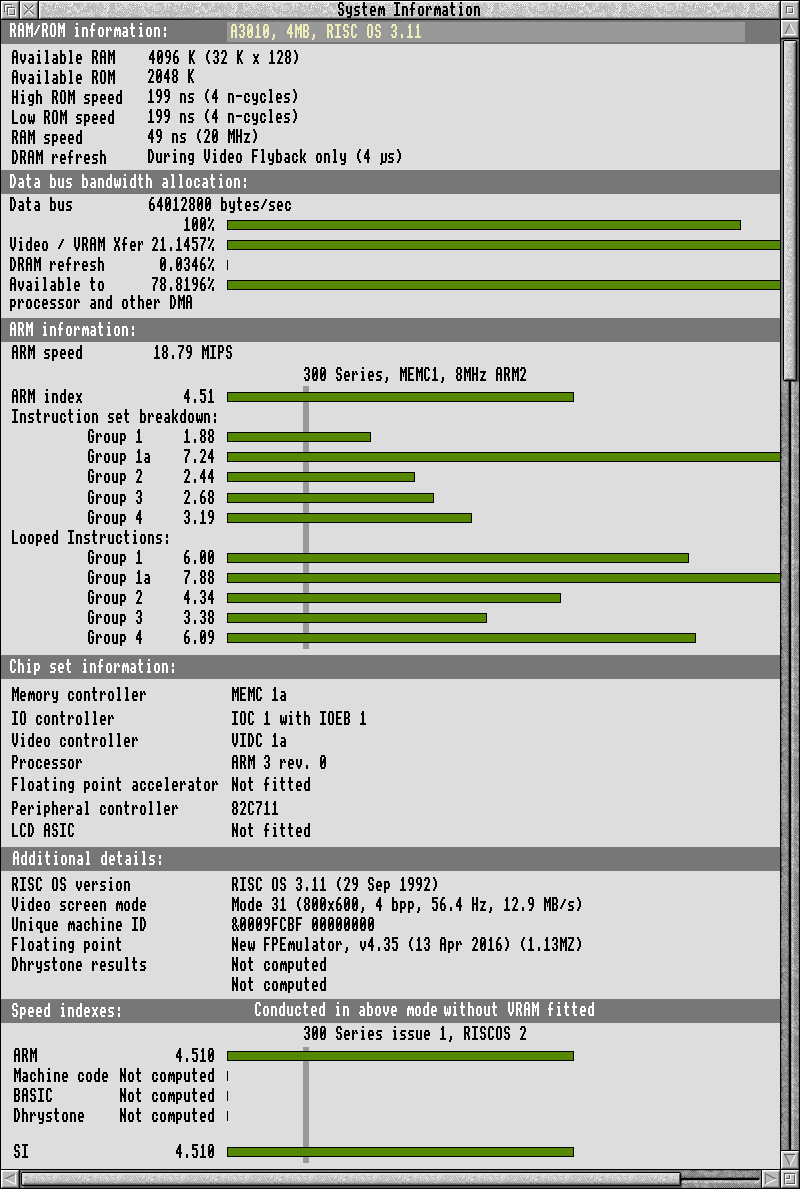 When using the !SI performance measurement application it very usefully gives you a breakdown of individual instructions so I can compare performance with that of other machines. With the faster RAM the memory write instructions STMIA show as performing a lot quicker than a machine with 8MHZ RAM:

I'm all for overclocking as long as suitable steps are taken to cool whatever is being overclocked. In this case I installed a heat-sink to the ARM3 CPU. The MEMC is covered partially by the upgrade board so cannot have a heat-sink added unfortunately. The RAMs are rated at 50ns which is about 20MHZ so there is no issue there.