In this article I detail my successful attempt at getting significantly more power out of the Acorn Archimedes A3010 computer. Originally released by Acorn back in 1992, the A3010 was aimed at the home computer market.

If you have an Acorn A3020 machine see my other article about replacing the motherboard RAM with fast 28ns RAM.

Compared to other Acorn machines in the Archimedes range the A3010 is quite limited in terms of expansion and also CPU performance. It doesn't have a built-in IDE hard disk interface, and is limited to 4MB of RAM.

Despite the limitations of the machine out of the box, It is possible to add IDE capability using the internal mini-podule socket and 4MB does go a long way in the world of RISC OS 3.1 (the operating system the A3010 runs on).

The main issue with the machine is the ARM250 CPU. The ARM250 is a system on a chip, meaning the CPU (a 50% faster version of the ARM2), Memory Controller, IO Controller and Video Controller are all found on the one chip making upgrading an ARM250 machine to the more powerful ARM3 CPU impossible. That doesn't mean that the ARM250 CPU can't be improved!

How Does It Perform?

The ARM250 runs at a speed of 12mhz which is also the speed the RAM is clocked at. In the A3010 the CPU and RAM speed are tied. The speed that one runs at the other must also be capable of running at.

Here is a performance test of the Acorn A3010 running at 12mhz using the popular !ArmSI V4 benchmarking application: 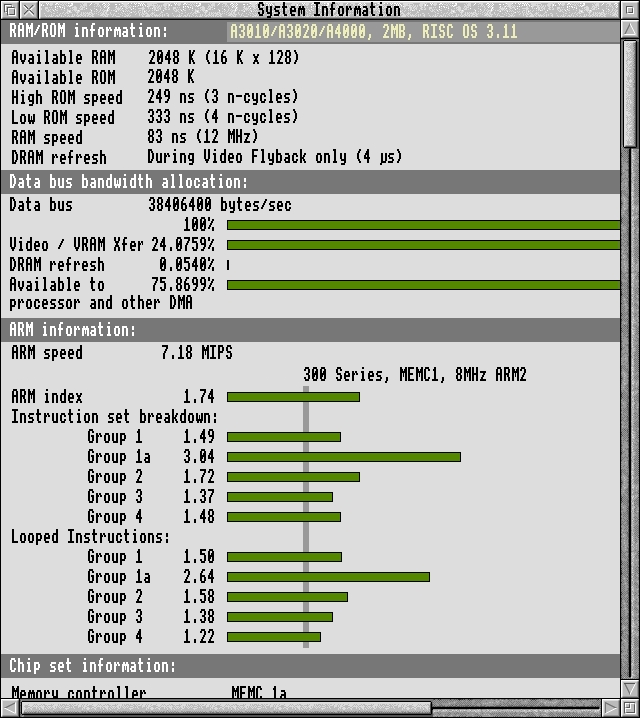 As you can see the memory is clocked at 12mhz (83NS) and the number of MIPS the machine is capable of is just over 7 MIPs. Not bad for a computer from 1992, but we can do better!

Here is the A3010 motherboard with the default 1MB RAM soldered directly to the motherboard and the 2 expansion sockets which take the total to 4MB: 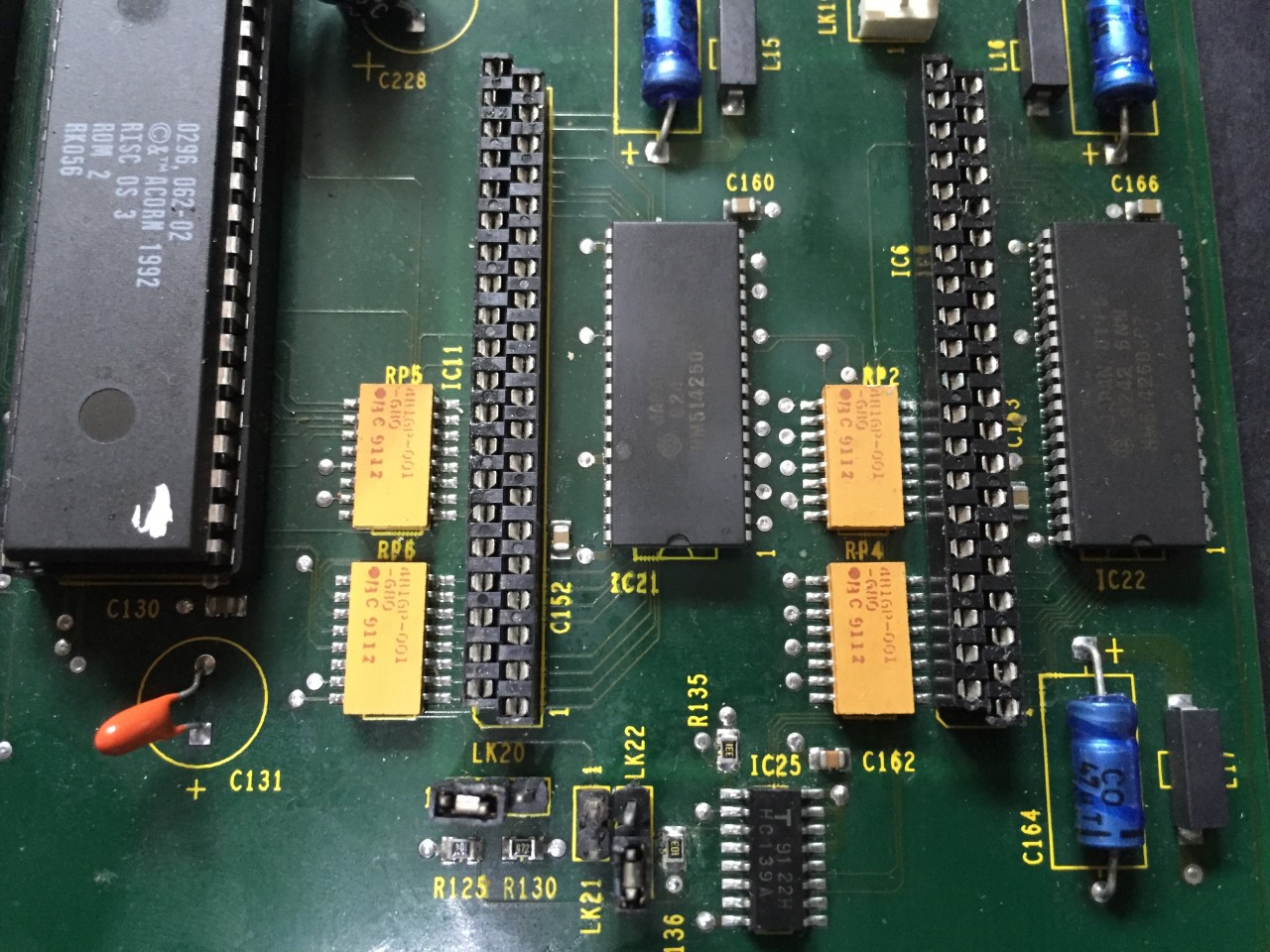 One of the RAM upgrades (made by IFEL) has 2 x 2MB SOJ-42 DRAMs and, interestingly, when connected "hides" the 1MB already on the motherboard. These DRAM's can easily be removed and replaced with much faster ICs using a hot air station.

This is where we increase the speed of the machine. The RAM chips in question, manufactured by Micron and run at 50NS can be found with this identifier MT4C1M16C3DJ-5. The interesting thing about these RAM chips is that they can easily be overclocked as low as 37NS. 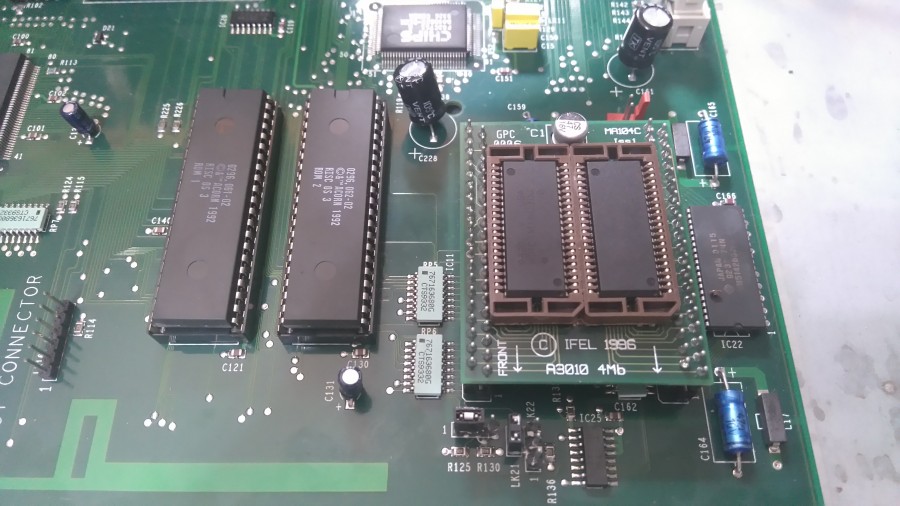 The image above is the PCB for my upgraded A3010. The upgrade is simply the new, faster chips added to the IFEL board and an 80mhz crystal added to the PCB which is shown further down the page. It's currently sat in a DIP-14 socket to enable me to push the ARM250 even further than 26mhz in the future when I get my hands on some faster 45NS RAM!

Along with adding the clock crystal a 220 ohm resistor is added next to it. The version of my A3010 PCB is one of the later ones that has a blank space for a new 80mhz crystal (The memory speed is calculated as the value of this crystal / 3) and resistor which is already connected to pin 8 of the ARM250. Why Acorn put these in and never used them is a mystery. Perhaps they were planning to release a faster version of the A3010 in the future?

Earlier A3010 PCBs do not have the space for the extra crystal so one must be created and wired in manually. Here is my PCB below which has space for a crystal X3 and also the resistor R76. Once these are added it is just a case of adding faster RAM. I chose to put a socket in for the crystal initially to enable the testing of different speeds. 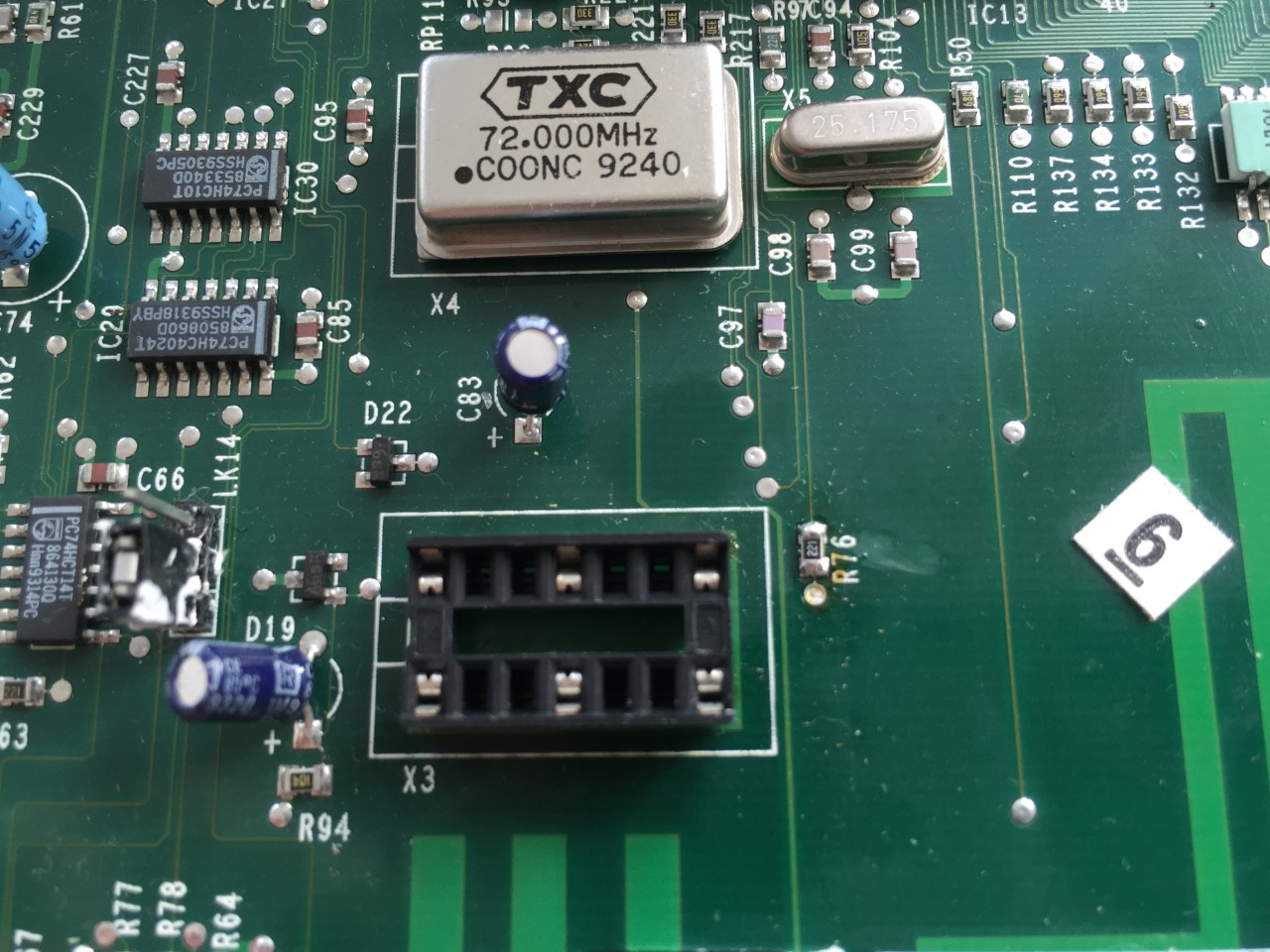 The end result of all this is my A3010 now runs at 26mhz as opposed to its original 12mhz, That's more than a 100% speed boost which is unheard of on an Acorn Archimedes computer. There are other benefits to overclocking the RAM too.

The speed of the A3010 2MB ROMs (which hold the OS) is also directly affected by the RAM speed. The basic rules from what I have gleaned from some very helpful people on the forum is that on an A3010, the ROM speed is 1/3 the speed of the RAM when clocked at 12mhz. However above 12mhz the ROM speed is 1/4 the RAM speed. What this means is that when we overclock the RAM, we are also overclocking the ROM.

So with the RAM and CPU running at 26mhz instead of 12mhz, the ROMs are running at 6.5mhz rather than their original 4mhz. So far this all seems okay and the ROMs work perfectly okay when running at this higher speed.

The ARM250 chip when clocked at 26mhz, amazingly, only runs slightly warm, more than the stone-cold temperature at 12mhz which isn't bad at all. I had expected it to get super hot. I added a heat-sink anyway for my own peace of mind. This raises the question of how fast can it go? Also, why did Acorn clock it so low in the A3010, A3020 and A4000 (The only machines to use the CPU to my knowledge).

The first thing you notice when booting the machine up after the upgrade is the very noticeable improvement in using the RISC OS 3.1 desktop. Previously it had been quite sluggish when dragging windows around, scrolling windowed content etc at 256 colour VGA resolution (640x480). But now its much smoother. It's not just moving windows around that is smoother. Opening files, copying files are faster. And of course, games such as Star Fighter 3000 feel much smoother and responsive when playing.

To see that the upgrade really did work and the A3010 is now running at the full 26mhz we use !ArmSI V4 to benchmark the machine. Here is what it came back with: 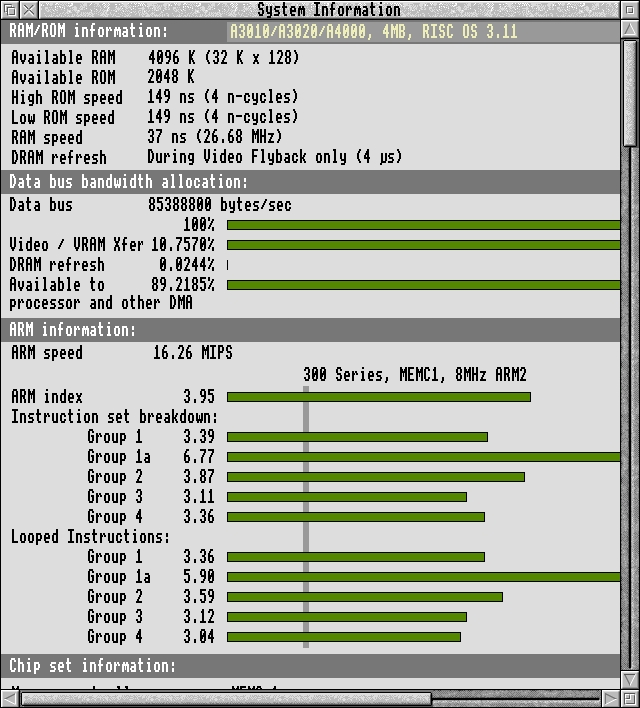 As we can see we are indeed running at 26mhz and the increase in speed has more than doubled the performance of our A3010 to just over 16.2 MIPS! For comparison, a 25mhz ARM3 CPU comes in at about 13.5 MIPS so this upgrade has given me a really powerful Archimedes.

The RAM chips however do run warm when the computer is doing some memory intensive work such as playing the game Star Fighter 3000. Some decent sized heat sinks sorted this out.

Although it shows us pulling 16.2 MIPS in V4 of !ArmSi, using earlier versions, of !Si with the Video DMA and DRAM Refresh disabled you will get an extra couple of MIPS. I prefer to use !ArmSI V4 as this is the most widely used benchmarking tool and is easy to make direct comparisons with other hardware. To see where our overclocked A3010 fits in with other Acorn machines we only need to run our eyes over this page and we see our A3010 is mixing it between the low and high-end A5000's.

Very good actually. With the graphics setting on Max you get a smooth frame-rate as the video below demonstrates. Both machines are running Star Fighter 3000 in the same Max graphics setting and no other in-game upgrades purchased.

With all this additional memory bandwidth available to the CPU and VIDC we can now use a screen mode that was previously not possible. The mode in question is SVGA in 256 colours (800 x 600 x 8bpp) and was not included in Acorns standard screen mode list. There is a slot for it in the list (Mode 32) but it is not implemented, presumably due to the lack of memory bandwidth/reliability when running at 12mhz.

With a lot of help from steve3000 from the forums who created a new mode module capable of 800 x 600 in 256 colours, I was able to get the A3010 RISC OS 3.1 desktop to run in 256 colour SVGA resolution. At 12mhz the screen on some machines exhibit a strange shimmering pixel effect due to a lack of bandwidth and makes the machine unstable and usually ends up freezing up. On other machines it is just too slow and makes the machine unusable. At 26mhz however, there is no problem, as we can see below! 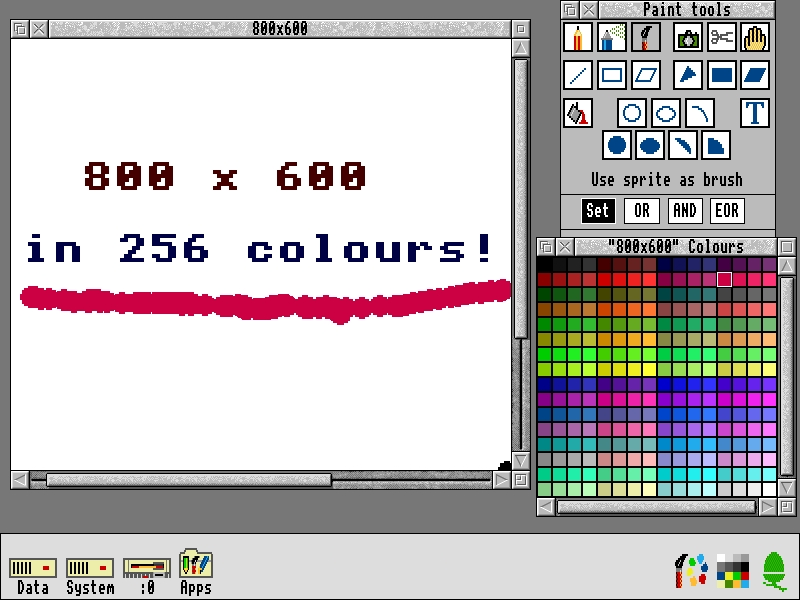 Here I tested the general desktop redraw performance when running 2 identical A3010 machines at 800x600 in 256 colours. The machine on the left is a standard A3010 running at 12mhz. The machine on the right is running at 26mhz. Using !Paint the test involves changing the colour palette from its large view to the compact view. Can you spot the difference in redraw speed?

There are a lot of arguments out there for and against overclocking. I personally am in favour of overclocking provided steps are taken to ensure the overclocked chips whether it is the CPU or RAM has sufficient cooling.

In the upgrade I have done here I have added a pair of small heat-sinks to the RAM chips. This will be increased in size as I intend to remove the sockets and solder the RAM chips directly to the surface of the upgrade board at some point.

Yes overclocking will shorten the lifespan of the CPU/RAM but, with decent cooling, it will not shorten their life by much.

If you are concerned about decreasing the life of the CPU or RAM then you could take the speed down to 20mhz (The 50ns RAMs are not overclocked at this speed) and only have the CPU slightly overclocked. The ARM250 datasheet talks about running it at 16mhz, so 20mhz cannot be that far out of spec? The 8mhz speed enhancement will certainly be noticeable. The choice how much you overclock it though, is yours!

With a bit of soldering you can turn your "lowly" A3010 ARM250 machine into an ARM3 beating powerhouse. Not bad considering all we're doing is replacing the RAM and adding a crystal.

Is it possible to get a copy of the Eagle or other format file to build some new 4 Mbyte RAM upgrades ? I have ordered some AS4C1M16F5-45JC, would you like a few to check how far they can go ?
I'd like to know if you have found a solution to get 4 Mbytes for the A3020 (and not 'simply' 2 megabytes) ... I'd like to have some upgrades built with fast DRAMs.

I have some 45 ns chips ordered from China. Do you want some to try them ?
AS4C1M16F5-45JC I do not know which frequency they can withstand ...